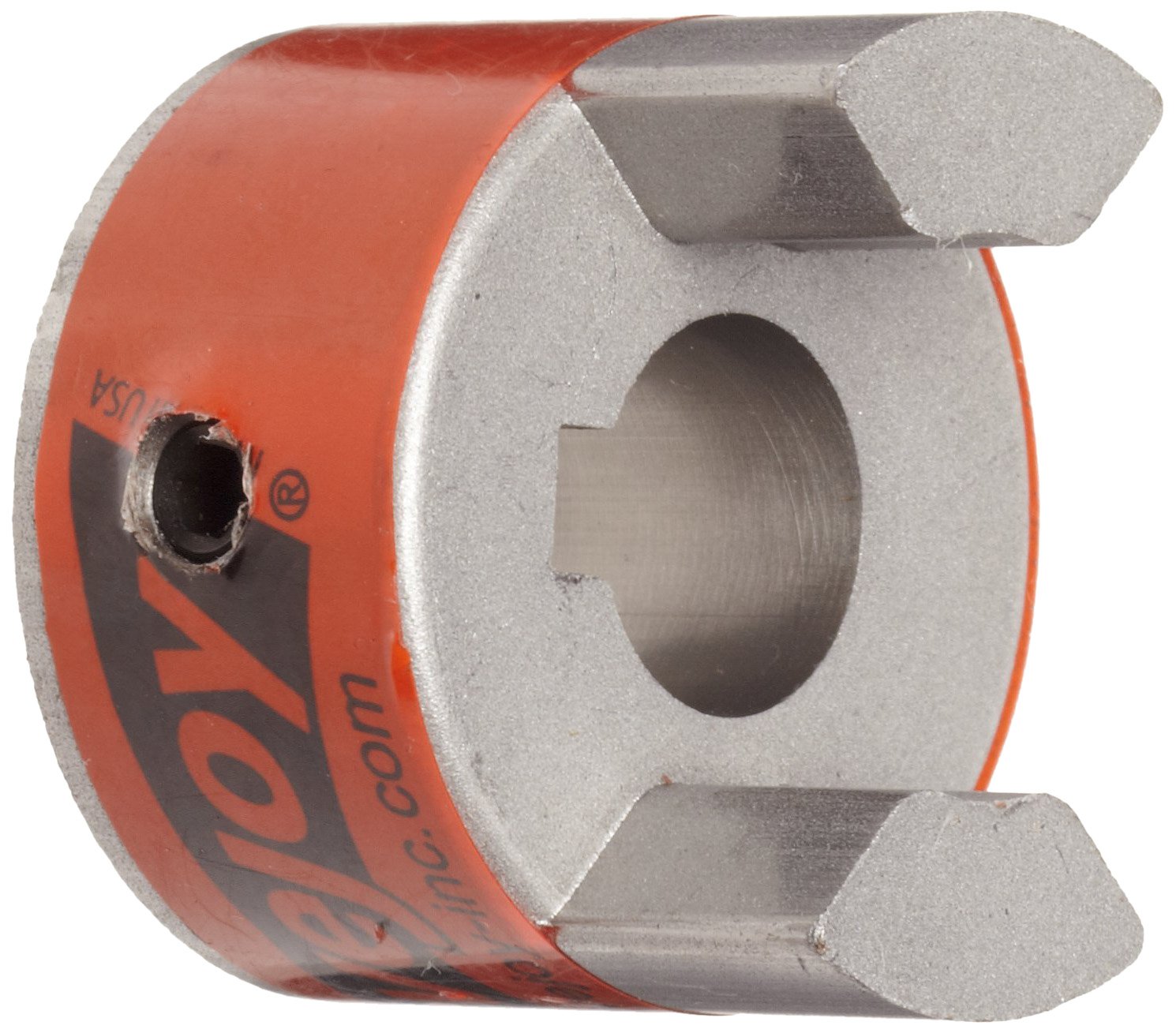 This Lovejoy standard jaw coupling hub replaces hubs on Lovejoy L type jaw style flexible couplings and is made of iron sintered with powdered metals for strength, durability, and corrosion resistance. This hub transfers shock and misalignment from the shaft to the center element of the coupling assembly for reduced wear on the shaft assembly. Lovejoy jaw style couplings are suitable for use in various industrial power transmission applications such as compressors, blowers, pumps, conveyors, mixers, and gear boxes, among others.

Flexible couplings are used to link two rotating shafts that are not aligned in order to transmit the rotational power, known as torque, from one shaft to the other. Most flexible couplings consist of two hubs and a middle assembly; each hub attaches to a shaft while the middle assembly flexes between the hubs to accommodate the misalignment of the two shafts. Shaft misalignments are generally either parallel or angular and cause complications to transmitting rotational power from one shaft to another in the form of stresses, loads, vibrations, and other forces, which vary from one type of misalignment to another. Flexible couplings are used in a broad range of applications, such as in motor vehicles, conveyors, escalators, agricultural, forestry and mining equipment, aeronautics, robotics and space exploration, among others.

This change in NICE's recommendations is a welcome step with the potential to reduce health inequalities and racialised perceptions in clinical practice, says this Editorial

This change in NICE's recommendations is a welcome step with the potential to reduce health inequalities and racialised perceptions in clinical practice, says this Editorial

Mr. Bar-B-Q Collapsible BBQ Caddy | Store Organize Your Sauces
editorial  |  Sep 9
Assisted dying: a question of when, not if

Given public support and broad shifts to permit assisted dying, it seems more likely a question of when, not if, for legalisation in the UK. This is an issue on which all UK doctors should now engage

David Oliver: What the plan for social care omitted
Noise exposure and dementia: a rising concern in ageing populations
David Oliver: When organisations’ behaviours betray their value statements
Proposed takeover of Vectura by Phillip Morris International
Use of private management consultants in public health
England’s schools must be made safe
Ronapreve for prophylaxis and treatment of covid-19
Why we need to make space for grief

Chronic kidney disease: summary of updated NICE guidance
Who will comfort me when I transition to adult services?
Should women with Lynch syndrome be offered gynaecological cancer surveillance?
Mental health and wellbeing of children during the covid-19 pandemic
A day in the life of a medical student from Ecuador
Wellbeing at medical school: feeling prepared
Medical specialties—the reality and the myths
“I feel like a spare part”

Assisted dying: a question of when, not if

Given public support and broad shifts to permit assisted dying, it seems more likely a question of when, not if, for legalisation in the UK. This is an issue on which all UK doctors should now engage

Some doctors say that neutrality is the best way for organisations such as the BMA to represent members’ diverse views on legalising medical help to die, while others say that it indicates tacit support and can mask strong objections

The greatest threat to global public health is the continued failure of world leaders to keep the global temperature rise below 1.5°C. More than 200 health journals across the world have come together to publish this Editorial urging governments to act

Climate action for health and hope

The climate crisis is a health crisis and has a narrow window for intervention, says this Editorial

This is climate breakdown, and it is having a real effect on our patients
opinion  |  Aug 12
The climate crisis is not slow and gradual but unpredictable and catastrophic
opinion  |  Aug 10
Climate crisis: Over 200 health journals urge world leaders to tackle “catastrophic harm”
news  |  Sep 6
Heat wave causes hundreds of deaths and hospitalisations in Pacific north west
news  |  Jul 5

1.
Risk of thrombocytopenia and thromboembolism after covid-19 vaccination and SARS-CoV-2 positive testing: self-controlled case series study
2.
Covid-19: Longer interval between Pfizer doses results in higher antibody levels, research finds
3.
Covid-19: How many variants are there, and what do we know about them?
4.
How long does covid-19 immunity last?
5.
Covid-19: Fully vaccinated people can carry as much delta virus as unvaccinated people, data indicate
6.
Covid-19: Do many people have pre-existing immunity?

What are your thoughts?